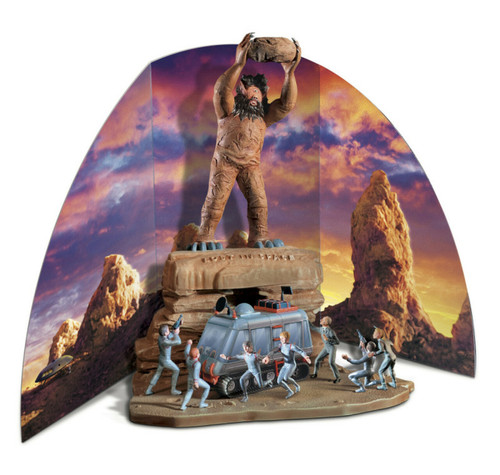 This model was was originally produced by Aurora in 1966, and later reissued by Polar Lights. This edition of the kit features new box art, a two-sided display backdrop, updated decals and instructions, plus new resin figures of Dr. Smith and Judy Robinson.   The figures are approximately 1:35, and compliment other 1:35 scale kits.   The Chariot is approximately 1:48 scale.

Doll & Hobby proudly presents the second release in a series of classic model kits based on properties from The Fantasy Worlds of Irwin Allen™!

Far from Earth and hopelessly lost, the spaceship Jupiter 2™ has crashed on a mysterious planet. On an exploratory excursion in their multi-terrain vehicle, the Chariot ™, the spacefaring Robinson family is confronted by one of the planet’s many strange lifeforms, a monstrous cyclops, intent on destroying the Chariot™ and its passengers…

Doll & Hobby’s rerelease of the classic Cyclops and the Chariot™ is an enhanced edition of the kit originally offered in 1966, shortly after the debut of Lost in Space.® This new release of the kit now includes figures of Dr. Smith and Judy Robinson, an updated window decal set for the Chariot, ™ a unique double-sided printed backdrop, instruction sheet and full-color packaging featuring an all-new illustration.